The Marietta & Cincinnati Railroad began construction in 1851 between its namesake cities in Ohio. The railroad was bankrupt by 1857, having built 173 miles from Marietta to Loveland. The Little Miami Railroad was utilized at the western terminus to provide through service into Cincinnati. At the eastern end, steamboats provided a 9-mile ferry down the Ohio River to connect with the Baltimore & Ohio Railroad at Parkersburg, West Virginia. With the Parkersburg Branch from Wheeling also completed by May 1857, the B&O now had a connecting rail route from the east coast to St. Louis.

The M&C came under control of the B&O in 1868. The B&O immediately began construction of a bridge across the Ohio River between Parkersburg and Belpre, and chartered the Baltimore Shortline Railroad to build west from Belpre and rejoin the M&C at Athens. The bridge opened in 1871 and the Shortline by 1874, leading to the later abandonment of the "old line" between Athens and Marietta. The B&O acquired the M&C in 1882 and reorganized it as the Cincinnati, Washington & Baltimore Railroad, later renamed the B&O Southwestern Railroad in 1889. When Chessie System became the parent of the B&O, C&O, and Western Maryland in 1973, declining traffic and alternative routings led to the abandonment of the former M&C. The last through train operated between Parkersburg and Cincinnati in 1985.

Today, 70 miles of the original M&C between Cincinnati and Greenfield are operated by the Indiana & Ohio Railway, while a 25-mile stretch east of Chillicothe through Hamden to Red Diamond is operated by US Rail Corp's Jackson District. The remainder of the original M&C right-of-way is abandoned, with 16 miles in Zaleski State Forest now serving as the Moonville Rail-Trail from Zaleski to Mineral.

The Marietta & Cincinnati consisted of eight tunnels. Half were on the "old line" between Marietta and Athens and abandoned by the 1920s. The other four were between Athens and Chillicothe, where tunnels at Byers (413 feet) and Richland Furnace (252 feet) remain active by US Rail Corp, while two others at Moonville (255 feet) and Mineral (355 feet) are now part of the Moonville Rail-Trail.

Built in 1855, Moonville Tunnel remains in excellent condition but graffiti covers both portals and brick lining. The tunnel and nearby cemetery are the subject of numerous ghost stories. Once a railroad and mining town of around 100 residents, Moonville has been uninhabited since the 1940s. 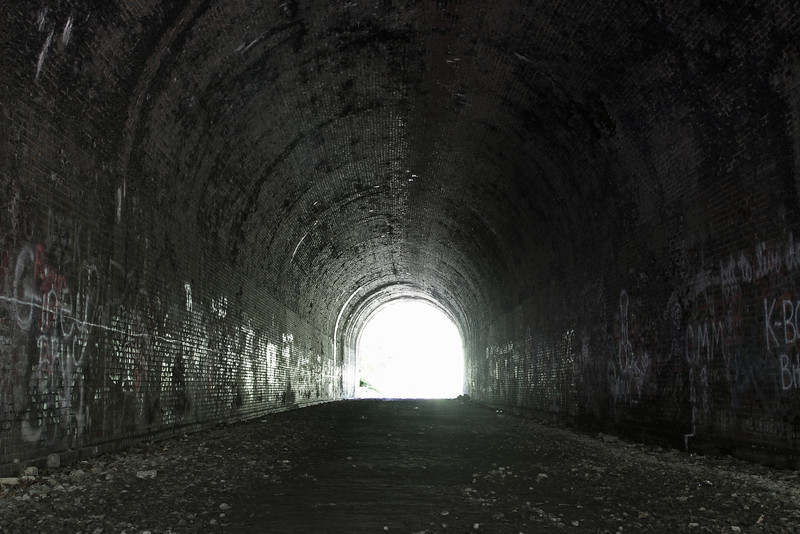