This 3855-foot tunnel was completed in 1871 by the New York & Oswego Midland Railroad (later the New York, Ontario and Western Railway or O&W). The tunnel spans Shawangunk Mountain between Mamakating/Wurtsboro and High View/Bloomingburg. High View was one of the first tunnels in the country to be constructed concurrently from both ends and joined in the center. Unvented and largely unlined, the tunnel suffered frequent rockfalls and required near-daily inspections during much of its use. A stone portal and 52 feet of brick arch lining were added to the north end in 1887 while the curved south portal remained bare rock throughout its life. Additional sections of brick lining were added in stages from 1895 to 1904, featuring unique stone portals and close clearance as shown above. The O&W route was abandoned in 1957 and track removed shortly thereafter.

The tunnel crest is near the south portal and considerable water exits the north portal. Following a rumored drowning, an unsuccessful attempt was made in the 1980s to seal the tunnel by collapsing the north portal. The resulting debris caused the tunnel to flood to a depth of up to nine feet. Highway 17 crosses over the tunnel and, as part of its upgrade to interstate standards for future I-86, plans call for widening and ramp construction directly over the north portal. To maintain the stability of the bore, the New York Highway Department cleared some debris from the portal in 2006 and installed a drainage pipe. The result of this effort was a reduction of water depth to approximately three feet nearest the north portal. 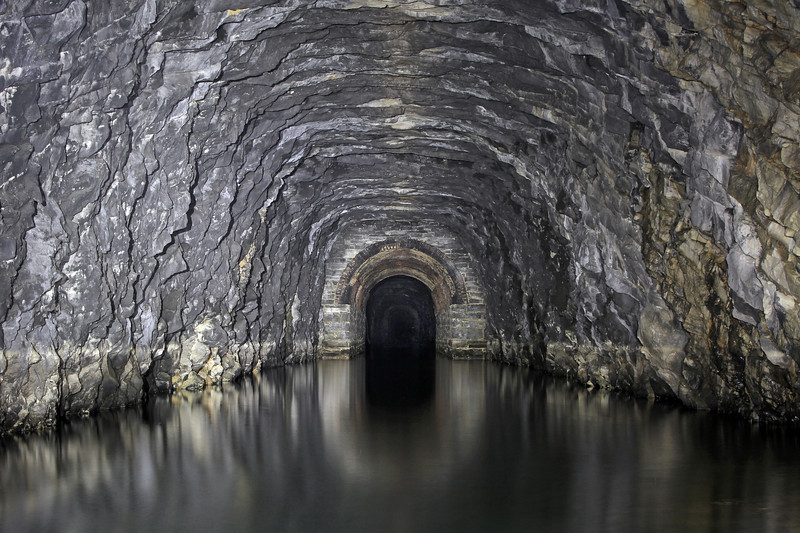 Looking south from within the flooded north portal