Construction began on the South Pennsylvania Railroad in 1881. The project was abandoned for financial reasons in 1885, leaving approximately 80 miles of railroad grade and nine incomplete tunnels in Central Pennsylvania. Six of the nine tunnels and many miles of grade were utilized for the opening of the Pennsylvania Turnpike in 1940.

Sideling Hill, the longest of the tunnels at 6,662 feet (lengthened to 6,782 for the Turnpike), was nearly half complete when railroad efforts were abandoned in 1885. Rays Hill, the shortest to be used by the Turnpike at 3,534 feet, was nearly 70% complete in 1885. Turnpike construction necessitated the widening of each tunnel and the addition of concrete lining and ventilation duct in the ceiling. Still, these two-lane tunnels proved to be a bottleneck on a four-lane highway.

Other tunnels at Blue Mountain, Kittatinny, Tuscarora, and Allegheny were "twinned" in the 1960s by adding parallel bores. Laurel Hill, Sideling Hill, and Rays Hill were bypassed entirely. Pictured here, Sideling Hill and Rays Hill are located on an 11 mile section of Turnpike bypassed in 1968 and now unofficially open to the public as part of the Pike 2 Bike recreation trail project. Laurel Hill, the first to be bypassed in 1962, is located approximately 60 miles west of this abandoned section and is now used privately for aerodynamic testing of racecars.

Two South Penn tunnels to never see automobile traffic are still standing parallel to the Turnpike near Somerset – Negro Mountain and Quemahoning. Pictured here, only 706 feet of 1,100 foot Negro Mountain Tunnel had been drilled when construction ceased in 1885. The Turnpike parallels the tunnel to its south at milepost 116. Quemahoning, the shortest of the nine South Penn tunnels at just 700 feet, was completed and utilized by the Pittsburgh, Westmoreland & Somerset Railroad from 1905 to 1916. The Turnpike parallels the tunnel to its north at milepost 106. The third South Penn tunnel to never be repurposed for the Turnpike is the original Allegheny Mountain Tunnel. Deemed unfit for Turnpike construction the in the 1930s, the east portal still stands north of the active westbound bore.

Note that there are also East Broad Top Railroad tunnels of the same names (Sideling Hill and Wrays Hill) pictured in separate galleries on this site. 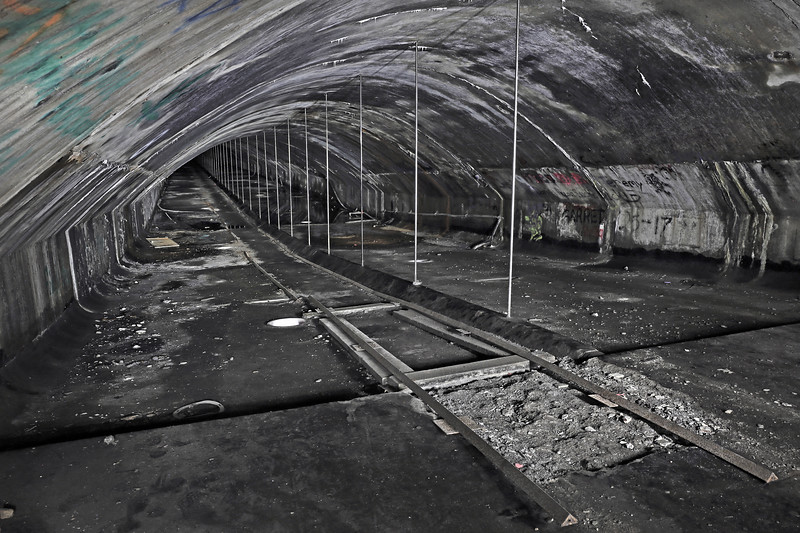